Mr Cameron was at a school and asking the children the difference between the
words accident and tragedy, and their meanings.
The teacher asked Mr Cameron if he would like to lead the discussion on the word
'Tragedy'.

A little boy stood up and offered: 'If my best friend, who lives on a farm, is playing' in the field and a tractor runs over
him and kills him, that would be a tragedy.'
'Incorrect,' said Cameron. 'That would be an accident.'

A little girl raised her hand: 'If a school bus carrying fifty children drove over a cliff,
killing everybody inside, that would be a tragedy.'
'I'm afraid not', explained Cameron, 'that's what we would refer to as a great loss'.

The room went silent. No other children volunteered. Cameron searched the room.
'Isn't there someone here who can give me an example of a tragedy?'

Finally, at the back of the room, little Johnny raised his hand and said:

Well', said Johnny, 'it has to be a tragedy, because it certainly
wouldn't be a great loss, and it probably wouldn't be a f...ing
accident either!'

Two couples were playing cards. Jeff accidentally dropped some cards on the floor. When he bent down under the table to pick them up, he noticed that Dave’s wife, Sandy, was not wearing any underwear! Shocked by this, Jeff hit his head on the table and emerged red-faced. Later when Jeffwent to the kitchen to get some refreshments Sandy followed him and asked, “Did you see anything under the table that you liked?”
Jeff admitted, “Well, yes I did.”
She said “you can have it, but it will cost you$100.”
After a minute or two, Jeff indicates that he is interested. She tells him that since Dave works Friday afternoons and Jeff doesn’t, that Jeff should come to their house around 2:00 PM on Friday. Friday came and Jeff went to her house at 2:00 PM. After paying her the $100, they went to the bedroom, had sex for a few hours and then Jeff left. Dave came home about 6:00 PM and asked his wife, “Did Jeff come by this afternoon?”
Totally shocked, Sandy replied, “Yes, he did stop by for a few minutes.”
Next Dave asked, “Did Jeff give you $100?”
Sandy thought, ‘Oh hell, he knows!’ Reluctantly she said, “Yes, he did give me $100.”
“Good,” Dave says.
“Jeff came by the office this morning and borrowed the $100 from me and said that he’d stop by our house on his way home and pay me back. It’s so good to have a friend you can trust.” 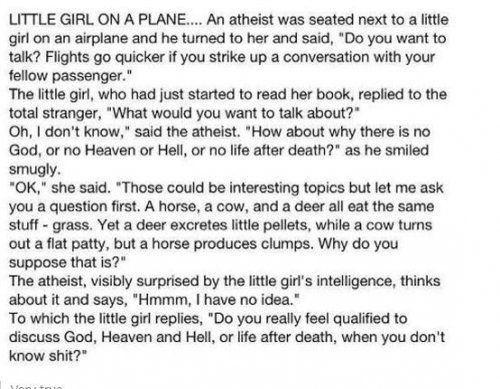